A new Place Names Officer was appointed at the Royal Commission at the start of July, who will be responsible for compiling the List and promoting it to the public in Wales and beyond. Our new colleague is Dr James January-McCann, who came to us from the Department of Welsh and Celtic Studies at Aberystwyth University, where he spent two years as a lecturer in Celtic Languages after gaining his doctorate in Sixteenth Century Welsh Catholic literature. 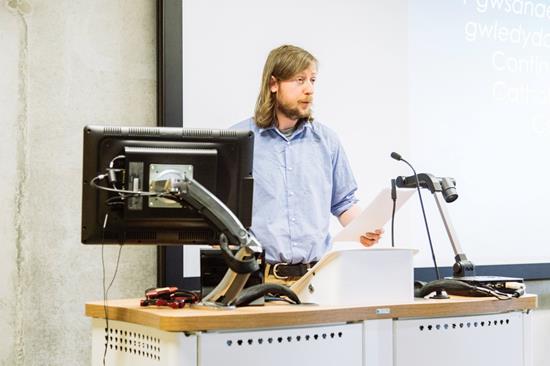 James said ‘I am excited to come and work for the Commission, and about all of the possibilities for the List of Historic Place Names. It will be an incomparable aid in safeguarding our history and national heritage.'

Our next immediate plans for the List are to finish uploading the Cynefin data, approximately 100,000 other names, and then move on to including other sources, such as the List of Welsh Parishes, c.1566, and Edward Lhuwyd’s Parochialia questionnaires. As well as this, we will be speaking at a number of public events, such as the Royal Welsh Show and the National Eisteddfod, and at various academic conferences, in order to give the project as much publicity as possible.

On Tuesday the second of July, a team of us, along with Bill Zajac of Cadw went down to Llandrindod Wells to address a conference of Street Naming and Numbering officers from thirteen of Wales’ councils. The purpose of our presentation was to show them how useful the List of Historic Place Names could be in their work, and to persuade them to make use of it. We received a very favourable response, and so far, six unitary authorities from across Wales have asked to use our data. Our hope is to increase that number, and to be able to give the same presentation to those councils not present on the day, so that the List becomes a useful and practical tool for defending our historic place names.